Your cart is empty

Being a vegan in Dubai is super easy with MYGOVINDAS!

Being A Vegan In Dubai Is Super Easy With MYGOVINDAS! - For the health-conscious and environmentally-concerned individual, being vegan is not only a food choice, but it is also a way of life. The vegan revolution really kicked off when people started becoming concerned about the impact of consuming meat and animal products. But for many, the transition to veganism is not so easy. People often complain about the lack of vegan options in a particular city or region and eventually ditch their vegan diet regimen. Fortunately, if you are in Dubai and are a proponent of a vegan diet, it cannot be easier.

At MYGOVINDAS, we have adopted sattvic cuisine as our way of preparing and presenting delectable dishes. Sattvic, being the purest form of diet is prepared only from fresh and organic fruits, vegetables, plant products, whole grains, etc. Health being our main focus, we also provide Vegan options for our guests.

Why Being Vegan Matters?

We live in a world that is increasingly being overcrowded because of population explosion. There is a dearth of resources. In such a scenario, it is ideal to be wise and use everything efficiently. According to various scientific studies, it is not a commonly known fact that meat production is a highly-inefficient way to feed our growing population. If we take numbers into consideration, it is observed that 13 pounds of grains are required to produce 1 pound of animal flesh.

Moreover, a vegan diet is good for health. When you adopt veganism, you are less likely to suffer from heart disease, cancer, diabetes, blood pressure, and other lifestyle diseases. The vegan diet is balanced to provide all the proteins, minerals, vitamins, fiber, and other nutritional requirements of the body.

Cherish veganism at the comforts of your home

If you are a resident or traveling to Dubai or are here for a long stay, being concerned about your veganism is genuine. But worry not. We are one of the finest vegan serving restaurants in Dubai that not only serve you vegan food but also promise to deliver the same at your doorstep.

If you crave a vegan delicacy but are not so eager to go outdoor, we at MYGOVINDAS can have you enjoying your vegan meal with zero effort. No more will you have to worry about sourcing ingredients, spending time in the kitchen, or straying around the streets to look for vegan restaurants. Just call us on 04 396 0088 and have your 100% vegan meal that you can cherish at home. 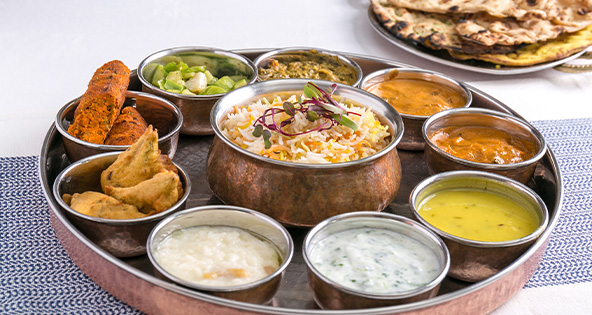 Why go vegan? All the reasons that matter for your body.

Going vegan has become the trend of 2018. Be it Dubai, or any other corner of the world, all types of people from the likes of Hollywood stars, sports celebrities, celebrity chefs...